The Hummer H4 arrived in 2022 after it was announced to be discontinued in 2010. Read here about how the new release differs from the old generation.

With the discontinuing announcement made in 2010, the release of the 2022 Hummer H4 feels quite like a twist of fate. The grand comeback of this nameplate comes in the form of an electric-powered pickup truck from GMC’s sub-brand for the early batch and then SUV for later.

History of the Hummer

Hummer was first released into the market in 1992 for SUVs and pickup trucks by AM General under the name of Humvee. General Motors then bought the brand name in 1998, which resulted in three-vehicle models: Hummer 1’s based on the original Humvee, then the H2 and H3 built using a smaller platform by GM.

While Hummer is a name that has been existed for a long, the Hummer H4 is going to be an all-new EV model within the lineup of General Motors. Previously, the name carries a uniquely masculine vibe but with an overly massive and wasteful impression. The 2022 launch revives the name by creating a wholly fresh rendition, with more impressive capability and more environmentally-friendly performance.

As per current, the only available engine option of Hummer H4 is a three-electric powertrain setup capable of generating 1,000 HP. It is claimed that the new EV can accelerate from 0 to 60 mph in 3 seconds due to Watts to Freedom (WTF) driving mode. AWD system comes as standard.

Another claim from the manufacturer says that the model offers 11,500 lb-ft of torque. However, it’s nearly certain that this figure is estimated using the gear ratios’ torque-multiplying effect. The claim may be misleading with how the calculation is done, but it is still safe to assume that the EV has incredible pulling power, as the actual number will be around 1,000 to 1,100 lb-ft.

This electric-powered car will be equipped with the new technology of GM’s Ultrium battery package, which offers a driving range of approximately 329 miles/charge. Moreover, the latest Hummer is said to feature an 800V electric platform with a 350KW flash-charging feature that offers 100 miles of extra driving range in merely 10 minutes.

Users who cannot access any fast-charging stations can charge using an adapter at home or via public charging terminals. However, these provide much slower charging times than the prior method. 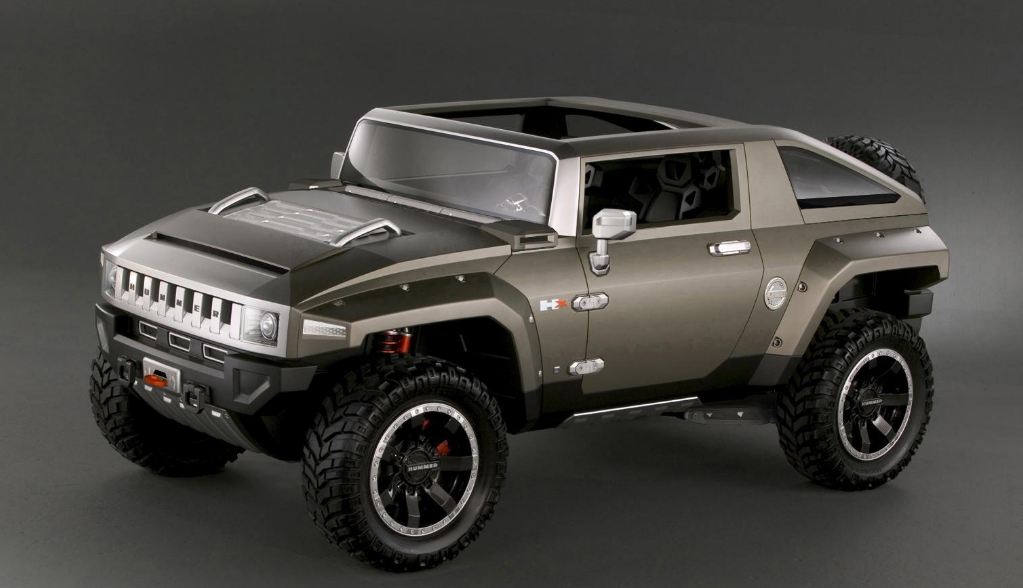 As mentioned before, the Hummer H4 will arrive in SUV and pickup truck forms, with SUVs coming into production later than the other. So, the following details will mainly talk about the pickup truck version.

The cabin of this new EV model is measured to be as roomy as the Sierra from the same manufacturer. It features a transparent panel similar to a regular panoramic sunroof, but when it is lifted, it gives a more comparable vibe with the convertible Jeep Gladiator. The interior of the 2022 Hummer has several design touches inspired by the moon, like the dead pedal with a moon-shaped footprint, which serves as a reminder of GM’s connection with NASA as it helped the engineering of the electric-powered Apollo 15.

Epic Games specifically design the graphics of infotainment UI, the team behind the insanely popular video game Fornite. In terms of technology features, it comes with a 13.4” infotainment screen and a 12.3” electronic instrument cluster. The connectivity options include Wi-Fi hotspot, Android Auto/Apple CarPlay integration, and the trademarked OnStar Vehicle Insights.

The EV Hummer was already released in fall 2021, with the first batch production only bringing Edition 1 – the highest-end of the entire trim grades. This trim is loaded with the best features provided in the lineup, such as the massive infotainment display, semi-autonomous driving mode Super Cruise, an electrically operated tonneau cover, and an adjustable air suspension.

More economical trims of the Hummer H4 will begin to come in 2022. However, even the base model of this series has a fantastic price tag of around $80,000. You can expect the Hummer EV3X to be the following release planned to arrive in 2022. The Hummer EV2X is scheduled to be launched in 2023, then later the Hummer EV2, which will go on sale in 2024.