By far, the iX is the most powerful EV to be produced by BMW. Take a look at how the 2023 BMW iX will continue the nameplate’s legacy below.

If you want to take a peek at what the electrified future of BMW will look like, then consider having a look at the 2023 BMW iX. It provides comparable practicality and space with the X5, but with even more advanced modern features that can compete with the likes of the Tesla Model X and Audi e-Tron. Find out what’s new for the upcoming model year of this series in the following. 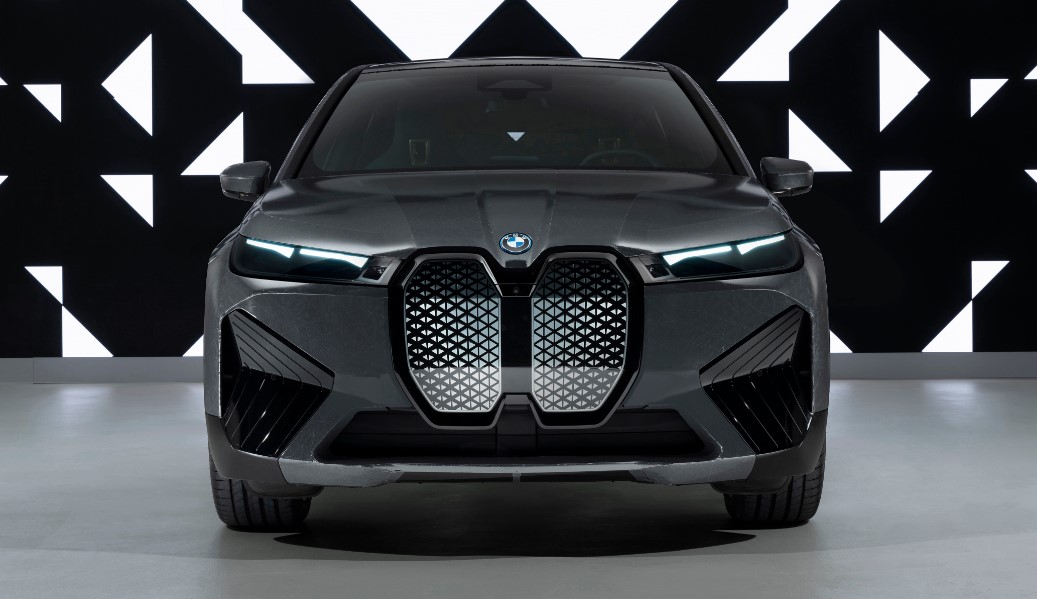 The 2023 BMW iX arrives by including a new performance-oriented variant M60 that provides approximately 280 miles of electric mileage range and 610 horsepower fully electric powertrain. It is equipped with air suspension to enhance the sporty riding experience. In other areas, a few different packages namely the Luxury, Dynamic Handling, and Convenience are now combined into one Ultimate package.

Previously, the iX variant only brings one trim: the xDrive50 that’s equipped with two electric powertrains that are capable of generating up to 516 horsepower and are offered in the AWD system as standard. However, the RWD system and adjustable air suspension, which come as standard for the new M60 trim, are available as options for the xDrive50.

The massive 105.2 kWh battery that supports the iX is estimated to offer 324 range ratings by the EPA. The mpg-e highway detail is not revealed, but according to a test by a major American automotive enthusiast magazine, the recorded rating doesn’t stray further from the EPA claims, which is a pleasant surprise based on EVs standard.

In addition, the iX also comes with fast charging function, claimed to be able to recharge from 10% to 80% in just slightly over half an hour when plugged into a 200-kW power source. A chain of charging stations for the iX is provided through the partnership between BMW and EVgo, but it is not impossible to capture the SUV on other networks as well such as Level 2 Home EV chargers.

According to the EPA estimation, the most efficient model out of the iX range is the variant with the base 20” wheels which acquired 86/87 mpg-e city/highway. Opting for the more significant sets most likely causes the figures to decrease, but not by far. 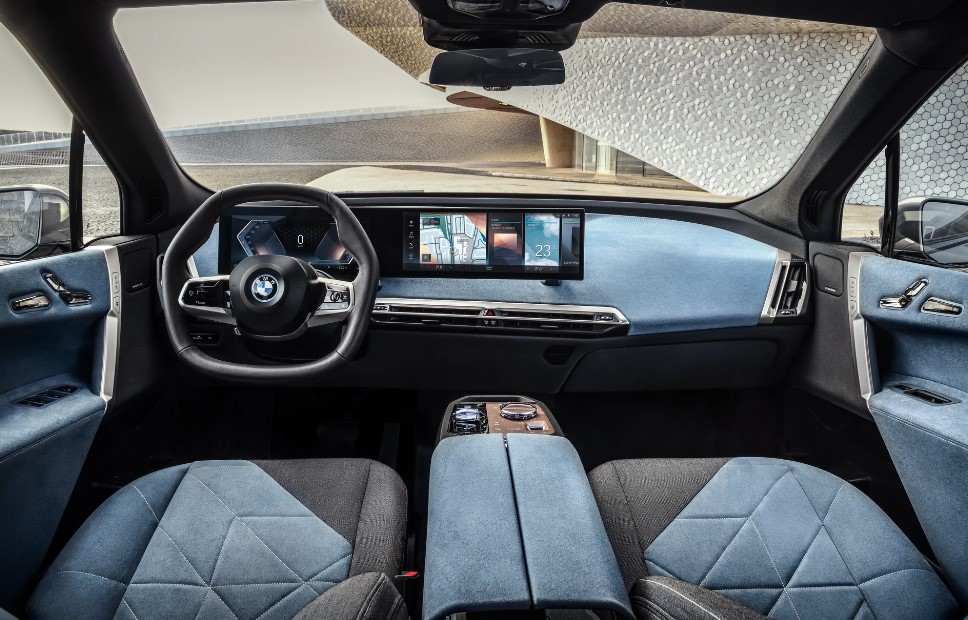 The Upgraded Interior Design and Features

Size-wise, the upcoming 2023 BMW iX is quite similar to the BMW midsize SUV X5 and X6, which also applies to the cargo and cabin areas as well. Inside, the design of the iX feels minimalist, clean, and modern with a set of technologically advanced features such as a substantial curved touchscreen infotainment display and a steering wheel in a hexagonal shape.

A giant panoramic sunroof is offered as standard by the model, while electrochromic glass comes as an optional feature. Furthermore, the front-row seats have power adjusted ad heated function. The manufacturer offers both genuine and synthetic leather wraps as well as textile fabric covers (microfiber cloths) which it fancily calls Loft for the seats.

The 2023 BMW iX, along with the BMW i4 sedan, is used by the automaker to introduce its future-generation infotainment system UI dubbed as iDrive 8, which offers customizable graphics and menu, and voice command function. The tech-savvy-looking dashboard that the iX has is adorned by a huge 14.9” infotainment screen and a 12.3” digital instrument cluster. Smart device integration options such as Android Auto and Apple CarPlay come as standard, as well as a 5G wireless hotspot feature. While an eighteen-speaker Harman Kardon audio setup is standard, there’s an option to upgrade to a whopping thirty-speaker Bower and Wilkins sound system.

The range of standard driver-assistance features given by the German-based luxury automaker is quite complete. You can find features such as lane-keeping assistance, auto emergency braking, parking sensors, and auto high beam headlights. 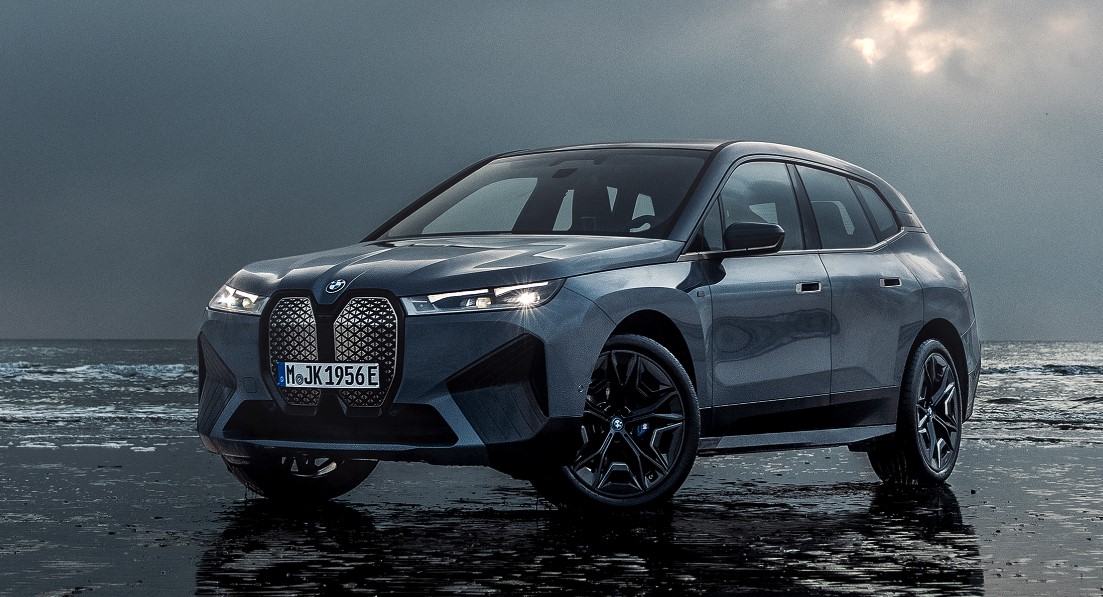 The Arrival Date and Estimated Price

As information, the 2023 BMW iX will start to become available in showrooms and dealerships by June 2022. It is still yet to confirm whether it is going to carry the new M60 trim only or bring back again the xDrive50 trim. Regardless, it has been confirmed that the starting price of the iX M60 will be just shy of $106,000. 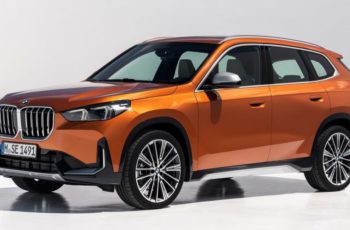 A fully redesigned model of the X1 is going to … 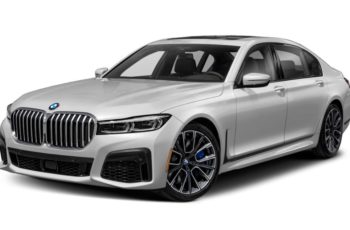