Home
Toyota
2023 Toyota Sequoia TRD, and What We Can Expect from Its Specs

Scheduled to be released in Summer 2022, the 2023 Toyota TRD is the full-size SUV to anticipate. Read the details in this article below.

Talking about Toyota’s lineup of Sequoia, it means we are going to talk about a full-size SUV. The 2023 Toyota Sequoia TRD has been introduced to the public through the official website of Toyota, and it’s said the lineup will be released in summer 2022. What will make this release special? You can find the explanation in this article below. 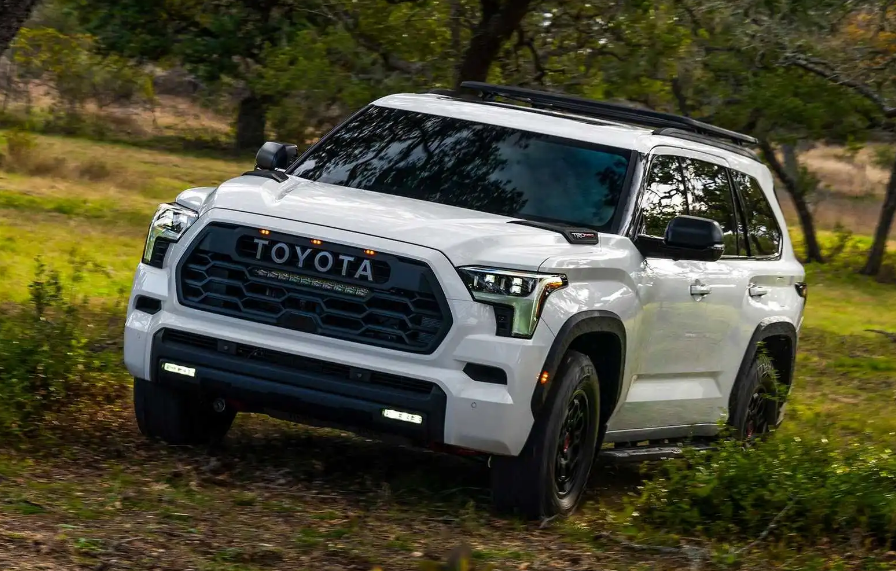 The 2023 version of Toyota Sequoia TRD

The following acronym ‘TRD’ marks the trim of Toyota Sequoia whose features will be more focused on becoming a total off-road solution for the lineup. But getting to know what features are on this trim means you need to learn about the overall feature of Toyota Sequoia since only a few features are made different from the basic trim with the TRD.

The new 2023 Toyota Sequoia TRD will be introduced as a strenuous trim to offer to the public. Although the façade can be pretty boring to be looked at, the exterior of the Toyota Sequoia 2023 version is showing that the a-bit-boxy car has a gallant body look. The grille is made smaller, and the headlight is simplified, but it seems like the forte of this release cannot be compared to these ‘simplified’ front features.

Coming inside, you will get amazing features that suit the big name of the carmaker. From its seating to the large towing capacity, you will never be discouraged by this piece from Toyota. The details will be explained later.

The engine, too, ‘sparks wonder’. It is no doubt that the Sequoia is set to be a full-size SUV version of Toyota—given that it will provide you with a good towing capacity with maximum power production and excellent torque.

You should know that the 2023 Toyota Sequoia TRD, along with all trims in the lineup, is providing you with hybrid options for its powertrain. For this reason, you can never blame Toyota for its high-end price for such an SUV, which is predicted to be more than $55,000 (for TRD) or $67,000 (TRD Pro). We will know the price details when it’s time.

The Interior Look of Toyota Sequoia

The 2023 Toyota Sequoia TRD and the rest of the trims will look similar, starting off with its excellent three rows seating. The three-row seating means you will have the seating to readily accommodate 7-8 passengers (including the driver). The third seat is the basis for all trims, but some features placed in its interior may only be ‘accessible’ in trims higher than the basic.

These features will include the heated and ventilated seating which will apply for the first and the second row of seating. In the second row, the captain’s seat is made optional from the basic eight seats. The materials upholstering the seating vary from one trim to another. You may choose from cloth to expensive leather upholstery as you reach the higher trim ladder. 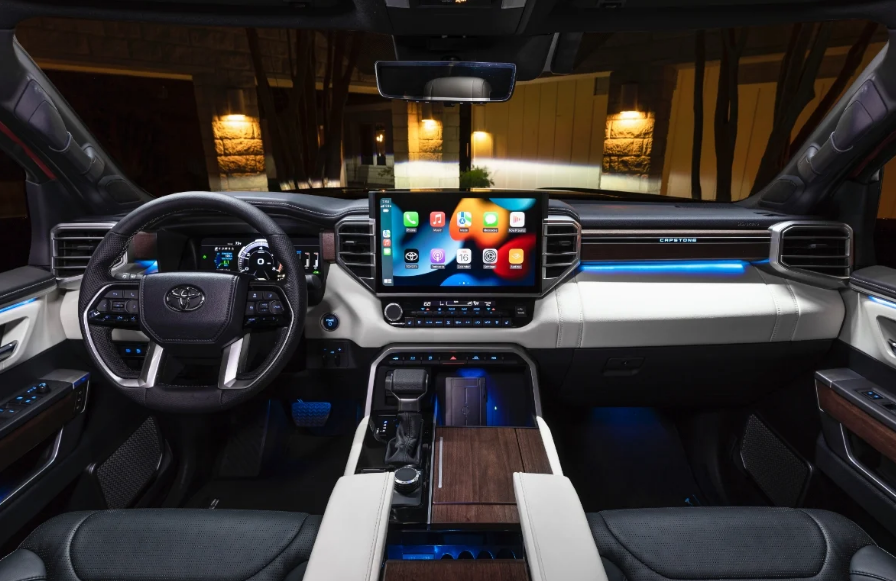 Other perks that you will get from getting a higher trim will also include the excellent interior trimming material like chrome. Panoramic sunroof and also the premium stereo system will also be made into addition as you add more bucks to spend.

On the front side of the interior, you will find an amazing 14.0-inch touchscreen panel that works best for both entertainment as well as navigation purposes. The screen itself is basic in all trims, but some trims may not use the latest Toyota’s latest multimedia software (which is OK if you are not a techy guy). This software is said to make smartphone mirroring, various music-streaming, and Wi-Fi hotspots are available to use.

The 2023 version of Toyota Sequoia TRD and other trims are all equipped with the hybrid option of the engine as its powertrain. This hybrid powertrain often referred to as the iForce MAX Hybrid, is able to produce a striking 437 HP in total, paired with 583 lb.-ft. of torque. The 10-speed automatic transmission is also part of this full-SUV, which basically operates on a rear-wheel-drive drivetrain.

As for the TRD version, the basic is the four-wheel drive. If you are picking the TRD Pro, your car will also come with more off-road details, such as front skid plate, unalike 18-inch wheels, ‘sophisticated’ shocks, and locking rear differential.

With these details, it seems like the 2023 Toyota Sequoia TRD will be able to be your full-size SUV for your ‘heavy’ travel in difficult terrains. With at least $55,000 to prepare, what do you think? Will it be a nice car to purchase? 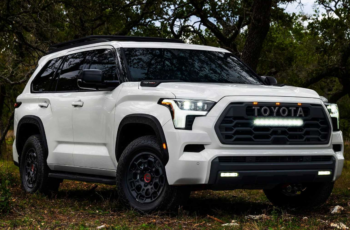